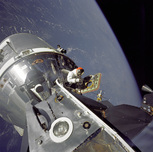 Interesting Facts or Quotes About the Mission: Apollo 9 was the first test of a lunar module in space. Apollo 9 was also the first space mission to test the Portable Life Support System in space. The Control Systems Module and Lunar module had a rendezvous docking after 6 hours and a 113-mile separation. The Apollo group named the Command Service Module Gumdrop and their Lunar Module Spider.

The Importance of the Mission: Apollo 9 was a major step in space travel because it was the first lunar mission to preform a rendezvous and docking of the Command Service Module and the Lunar Module. This success was important for the design and execution of future Apollo missions. Another great feat accomplished on this mission was the testing of the Portable Life Support System in space. This was important for space exploration because it was the first time man was able to leave the spacecraft, which led us to the first man walking on the moon.